The Lunar Cycle and Fishing 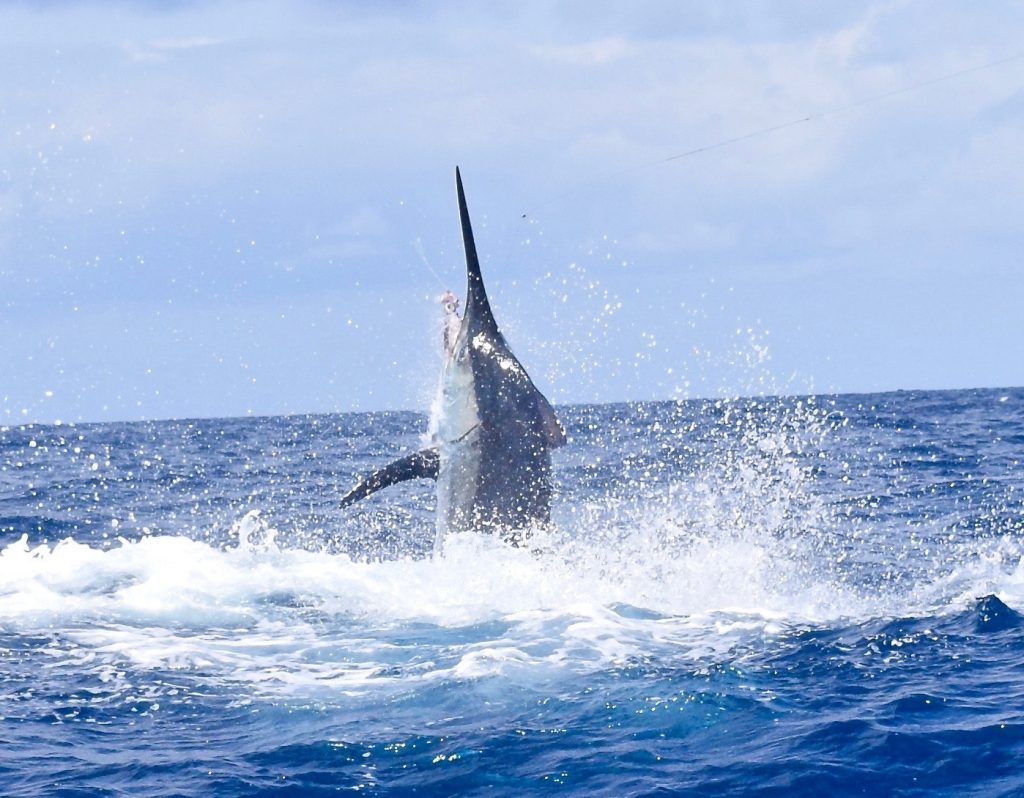 Since man started to fish we have searched high and low for anything that will give us an edge and increase our chances of reeling in a bigger haul. It is widely believed that the moon phases effect the way the fish hunt for their prey and bring them closer to the surface and naturally closer to our lures and baits.

When asked when the best time to fish is Benoit and Jean-Paul closely follow the lunar calendar and advise a time close to the full moon for the trip. To make it easier for you we have included the latest cycle at the bottom of our website so you can get a quick snapshot of what the current conditions are without having to search for it yourself.

Below is a post from Marlin Mag a popular Fishing Magazine that covers the topic extensively.

| |The author crunched the numbers from more than 65 years’ worth of New Zealand catch records to determine if there was any significant correlation between the number of fish caught and the phase of the moon. (DLR, CC-BY 3.0 / Rolf Hempel; Brandon Cole [inset, top]; Doug Perrine [inset, 2])|

In their endless quest to understand the mysteries of their quarry, fishermen consider just about every factor imaginable that could affect the movements and feeding patterns of fish. Time of year, water temperature, sea conditions, atmospheric pressure, time of day, wind direction and weather are some of these factors, and I believe that many of them do have an effect on various species of fish. Looking for a single factor that applies to all fish, I soon found that for any general rule, there are plenty of exceptions; factors that seemed to affect one species did not seem to affect others.

One of the most commonly accepted atmospheric forces that anglers rely on to predict a hot bite — moon phases — is still hotly debated. One night, on a small island in the Tongan group in the South Pacific, I sat down to a kava party with a group of village fishermen. This mainly consisted of singing and tossing back coconut shells full of the earthy, narcotic brew made from the kava root. During the time between when I sat down and when my lips and my brain went numb, the topic of the moon’s effect on fishing came up. Tongan fishermen do a great deal of fishing at night for reef fish. This, I thought, could be most illuminating — with centuries of fishing knowledge, passed down from father to son, these guys must have it all sorted out.

“What,” I asked during a break between songs, “is the best moon to go fishing on?”

“Ah, this three-day gap is important, is it?” (This could be it, I thought — the great secret!)

“Oh, yes. That’s how long it takes us to save up for the petrol.”

It was right about then that I realized that there was not going to be any simple answer to the question of lunar cycles and fish behavior.

Over years of fishing, it’s easy to gain impressions about things without having any proof, and then to believe them with absolute certainty. Knot strength is one example. When I put many of my long-held beliefs about knots on trial on a line-testing machine, I made many surprising discoveries. The effect of the moon’s cycles on fishing also falls into this category. For example, it seemed to me that fishing for our local snapper (squirrel fish) was harder during a full moon, but there are so many other variables involved, it was hard to be sure.

| |Does the moon phase affect when fish can and do feed? Are larger fish caught during certain phases of the moon? Do you catch fewer fish on full moons, when fish can feed all night? (Brandon Cole)|

Big-game fishermen in particular are interested in the moon’s effect on catch rates. If the best moon phases were known, anglers could organize their fishing efforts around those times.

The guys who have the greatest long-term experience fishing for marlin are charter captains, but naturally enough, most who I’ve spoken to seem reluctant to shed any light on the subject. As one very experienced skipper said to me, “Yes, I do notice patterns, but if I told everybody what they were, then I would probably find it harder to get charters in the less favorable times.”

While attending the Hawaiian International Billfish Tournament (HIBT) in the 1980s, I was told that after reviewing around 30 years of catch data, the event’s organizers planned the dates to coincide with the dark-of-the-moon (new moon) phase. Kona, of course, is largely a blue-marlin fishery. Then I read an article that said that St. Thomas, in the U.S. Virgin Islands (also a blue-marlin fishery), gets its hot bites over the full-moon periods each summer. An American angler fishing the HIBT told me that the big tides that come the weeks before and after the full moon over the North Drop cause the fish to congregate along the drop-off.

Another review I read about the black-marlin fishery in Cairns, Australia, indicated that the best catch rates for black marlin in that fishery were over the periods of the first and last quarters of the moon.

However, my home fishery in New Zealand is based on striped marlin — the largest of their species in the world, as a glance through the IGFA record book will confirm. None of the material I could get my hands on mentioned striped marlin and the moon phase, so overall, I was back to square one when it came to fishing at home. I decided to try and find out for myself what effect, if any, the moon has on our striped-marlin bite.

New Zealand’s Bay of Islands Swordfish Club is the world’s second-oldest existing game-fishing club, behind the Tuna Club of Avalon in California. The oldest catch boards on the walls of the Bay of Islands’ Russell clubrooms are the record fish caught by Zane Grey.

Fortunately, the club happily gave me access to its entire archive of catch records, and I extracted meaningful results from the yearbooks dated 1929 and later. A website allowed me to access moon-phase data back to the 1700s, so matching the catch data to the moon phase was not a problem. The only data that I could not find was details of the fishing effort made for the catch recorded.

There was no way of telling how many boats were fishing at one time, so I had to assume that the massive amount of data available would even out the effects of public holidays, tournaments, bad weather, world wars, commercial longlining and other distorting factors.

The number crunching was a laborious process. Just to photocopy the records and print the moon-phase data took an entire day. Then the date of each fish capture had to be converted to a lunar date (the moon works on a 28-day cycle) and plotted. After about a week behind a desk, I had processed 65 years, from 1930 to 1995 — more than 11,000 striped-marlin captures — before running out of time and energy. I concentrated only on striped marlin.

The results? Well, they were not as definitive as I had hoped. Unfortunately, real life (and more specifically, reel life) does not give perfect graphs, and without fishing-effort data, I was always going to get imperfect results. In this situation, there is the temptation to massage the statistics with means, averages, confidence levels, trend lines and so on, but I decided that this would give a false impression of the results, so I left them in their raw form and plotted them out against the moon. (See graph to right.) There are certainly some trends, which include:

| |Whether striped marlin bite more during certain phases of the moon or not, New Zealand is definitely the land of giants! (Doug Perrine)|

Interestingly, some time after completing this statistical exercise, I read a piece by Ernest Hemingway about fishing for marlin off Cuba. He reported that “marlin seem to feed best after the first quarter through to the full moon, and to drop off during the last quarter. They usually drop off in their feeding for a day or so when the moon is full.” Although Cuba is largely a blue- and white-marlin fishery, and is located in the Atlantic rather than the Pacific, all of these effects can be seen to some extent in the graph of striped-marlin catches that I assembled from the Bay of Islands’ records.

But all of this must be put in perspective — the variation was not extreme. On the worst day, 315 striped marlin were caught, compared to 462 on the best day. Hot bites and big results were recorded on every day of the lunar cycle at some stage over the years; even those days that rated poorly overall occasionally recorded a red-hot bite. So, taken over the long term, the trends are not dramatic enough to be critical to fishing success or failure on any given day — not in the section of New Zealand’s striped-marlin fishery sampled by boats fishing out of the Bay of Islands, anyway.

It’s also probable that factors like weather, water temperature, baitfish availability, time of year and recent results are much more important than the moon, along with that most critical factor: the opportunity to do the fishing. The phase of the lunar cycle is not reason enough to stay ashore.

What About the Sun?

Anglers may not appreciate it, but while the moon has the greatest effect on our ocean tides in most places (there are exceptions; Tahiti is one), the sun also has its own part to play. There is a solar tide, three-sevenths the strength of the moon’s, with its high at midday when the sun is directly overhead.

Many skippers have commented to me that they seem to catch most of their billfish in the middle of the day, although there seems to be a change-of-light bite early and late in the day, as well as a change-of-tide bite for marlin and other predatory fish. I’d always assumed that the midday bite occurred because it’s when many boats arrive at their fishing grounds for the day and are putting in maximum effort, but maybe the solar tide has some effect too.

Regardless of the effect of the moon or the sun, one old adage remains true: The best time to go fishing is when you can!